Is Your Pet Overweight? 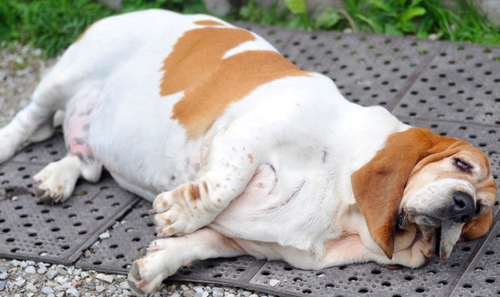 It's kind of strange that we are more conscious of our health now than ever before, but we are also the fattest people on Earth. I remember seeing a comparison between us and the French.
They showed pictures of two women, one American and one French. The French lady was sitting there at a sidewalk cafe in Paris with a plate of food and a glass of wine, taking her time and having a conversation with a friend while the second picture showed an American woman sitting at a McDonald's eating a Big Mac, fries, and a 32-ounce soda. The French woman was slim and trim while the American woman's backside was as big as a house.
It's well known that being overweight exposes us to a host of chronic diseases like high blood pressure, diabetes, arthritis, and stroke. We may be the fattest people in the world and we can make that choice, but are we exposing our pets to the same problems?
My friend has a cat named Merlin. Merlin is about 13-years-old now and is so fat that he can hardly make it up on the couch. When he lays down he can hardly get up because his belly gets in the way. I fear that if he lives a couple of years more that he will come down with joint problems or diabetes and his last years will be suffering ones.
My aunt and uncle also have a big cat. His name is Percy. Percy was extremely overweight and was diagnosed with diabetes a few-years-ago. He is now on a diet and has lost weight. He still has to be given insulin injections twice every day.
According to The Healthy Planet Magazine:
"Dogs and cats are considered to be overweight if their weight is 10% greater than optimal. Obesity is defined as being more than 20% over optimal weight. Unfortunately, this disease is now at an epidemic level: 25-50% of dogs and cats are obese; 50% of middle-aged pets are obese."
Overweight pets suffer from even more chronic diseases than overweight people. They include: exercise intolerance, cystitis, cancer, thyroid problems, not to mention being a hunting dog. Dogs are more likely to get some of these diseases and cats are more vulnerable to others.
As in humans, the key to weight loss in pets are the same as those in humans: diet and exercise. The first thing to do is to stop feeding whenever the animal wants food. Dogs should be fed 2 meals a day and cats should be fed 2-4 small meals a day. You could also try some of the diet brands of pet foods that are out there on the market.
The next step is exercise. Play with your cat. Make sure he or she gets up and moves around. Get them a playhouse that they can explore. Dogs should be walked frequently and for good distances, just letting them run around in the yard is not enough.
But what if you don't have time? I know one person who puts his dog on the treadmill each day so he can get his exercise. Most people love their pets and want them around as long as possible. Having them lose weight will keep them around.. And who knows, it might just inspire you to lose a few pounds yourself.